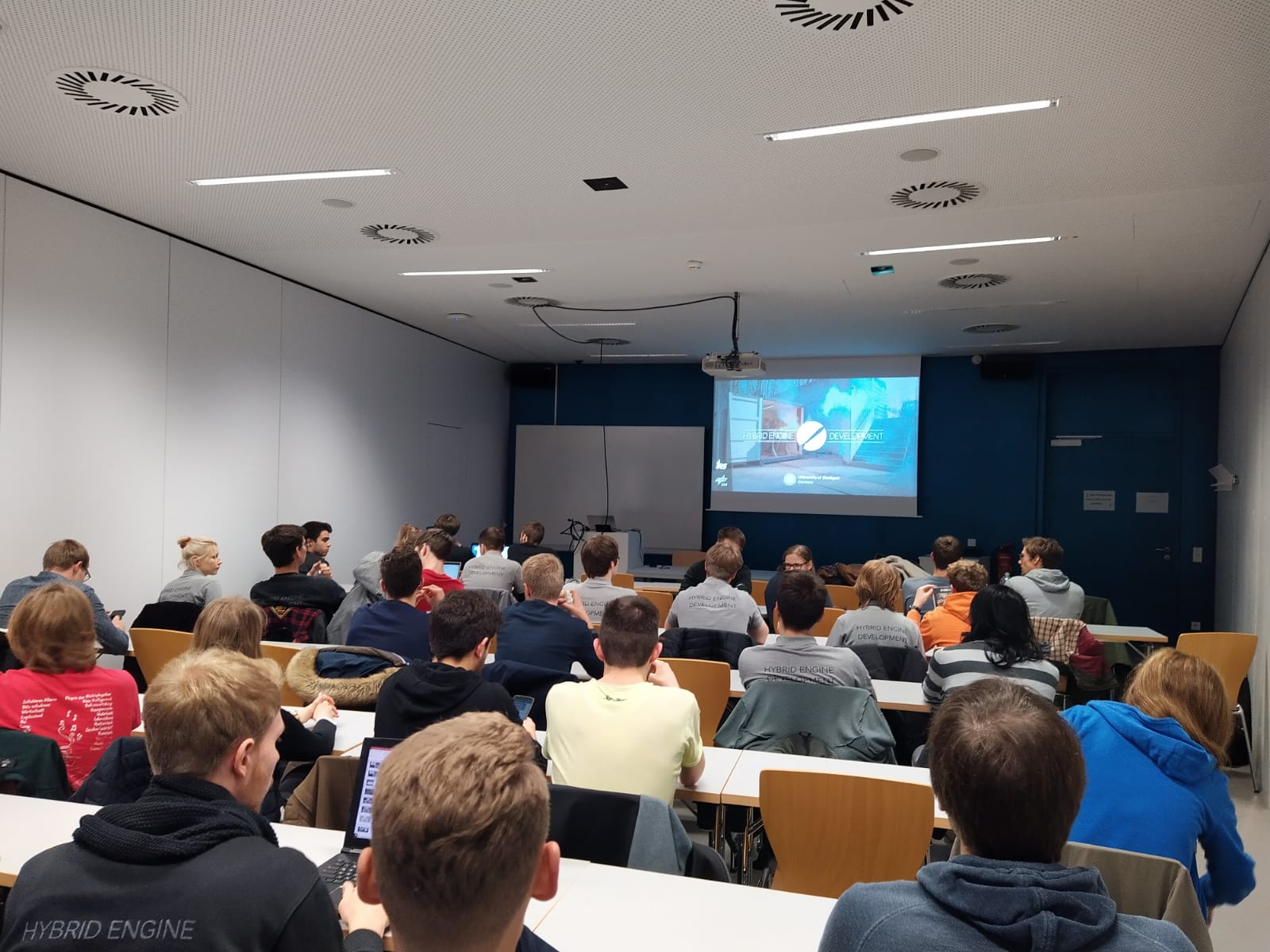 Learn more about the founding of HyEnD and our previous projects!

Learn who we are and get to know our team!

Learn how a hybrid rocket engine works and why we use them!

„Hybrid Engine Development – HyEnD“ is the boundary-pushing student rocketry team of the University of Stuttgart. In November of 2016, we set the European altitude record for student and amateur rockets as well as the world altitude record for hybrid propelled student rockets, achieving an altitude of 32.3km with the launch of HEROS 3. Fueled by our shared enthusiasm for rocketry, we are continously looking to develope exciting new technologies and strive to pass down our knowledge to newer members.

In June 2006 Hybrid Engine Development was founded by the student working group „STAR“ at the University of Stuttgart, located at the Institute of Space Systems. Over several years, the group gained a high level of understanding of the processes in hybrid combustion chambers. Hybrid rocket engines were chosen because of their inherent safety. They use simple, safe, easily available, storable and manageable propellants like paraffin wax and nitrous oxide. They have high performance comparable to storable liquid propellants and are simply great for student groups. Whilst working with rocket engines, students of all semesters at the University Stuttgart can gain invaluable hands-on experience in the rocket propulsion field.

In the first years the main focus of HyEnD was to develope hybrid rocket engines with a thrust of up to 2000N for a duration of 10 seconds. In 2008 the first hybrid rocket engine was tested at the University of Stuttgart. Later, a smaller engine with 250N thrust was developed, mainly to improve the overall design and test advanced fuel formulations.

Development of a 10kN Hybrid Engine

6 years after the founding of HyEnD, in the late summer of 2012, the German Aerospace Center (DLR) started a program to fund several student groups at different German universities to develop their own small sounding rockets. The project was called STERN (STudentische Experimental RaketeN). Over the course of 3 years student teams were suppossed to develop, build and launch their own rockets. HyEnD was the only student team to aim for the European altitude record, which was 12.5 km back then, held by the DARE team of the university of Delft. HyEnD eventually decided to overshoot the STERN goals by building and launching a rocket to an altitude of 20 km. This would require a large hybrid rocket engine with 10kN of thrust. In cooperation with the DLR Institute of Space Propulsion test site Lampoldshausen a student test bench was constructed. Lampoldshausen is a small village 70km north of Stuttgart, but in the nearby forest a leading test site for rocket propulsion is located. For example, the rocket engines for the European Ariane rockets are tested there. Lampoldshausen was only logical location to test the HyEnD rocket engines, as great equipment is offered and safety guaranteed.

From 2012 to 2015 the “Hybrid Rocket Engine Stuttgart – HyRES” was developed. This engine, with its new paraffin formulation and cutting-edge combustion chamber, was able to produce 10kN of thrust for a duration of more than 20s on average, reaching a combustion efficiency of up to 98%. This is one of the most advanced, sophisticated and efficient hybrid rocket engines in the world, developed, tested and built only by students from the University of Stuttgart. The test campaigns were always a great experience. The rocket engine might be the centerpiece of the rocket, but many other important development steps were done in the 3 years until 2015 to develop the rocket “Hybrid Experimental Rocket Stuttgart – HEROS”. Lightweight rocket structure, electronics & telemetry systems, a recovery system with automatic parachute release ready for supersonic deployment, a pyro-valve and many other large and small subsystems were developed and evaluated by the students of HyEnD. To test all the subsystems in small scale, a demonstrator rocket called MIRAS was launched twice in Germany. The second launch of MIRAS in August 2015 went perfectly and reassured the team of HyEnD that all the subsystems are working as expected.

Our rocket HEROS needed to be launched from the European rocket range Esrange in Kiruna, Sweden, albeit the infrastructure needed for remote-controlled oxidizer loading and launching our rocket in the harsh conditions of the polar winter was yet to be designed. In October 2015 HyEnD started its first launch campaign in Esrange. The preparations worked very well, despite some time conflicts with the other participating student teams. However, HEROS couldn’t be recovered due to an engine failure caused by low oxidizer temperatures, albeit launching successfully. The DLR and HyEnD agreed on a one year extension to build another version of the rocket, called HEROS II. One year later, after a lot of investigations and failure analysis, HyEnD returned to Esrange, not only with HEROS II but also with HEROS III. This time the ground support equipment, as well as several subsystems, were improved. Sadly, HEROS II failed due to a loss of contact with all electronic systems, as the ignition impulse of the engine sent a power-off signal to the power control unit. After a week of troubleshooting of the electronic system, the error was located and the Esrange safety board approved the launch of HEROS III. It went perfectly and set the new altitude record of 32.3km, although the rockets oxidizer was only filled to 70% for safety reasons.

In the year 2017 the student team built up a new group of younger students to follow up the history of rocket engine testing and rocket launches. After the end of the STERN program, a smaller project was initiated to train the new team members. During the project, a small solid fueled CanSat Launcher was developed as an intermediate project. The launch took place in winter 2017 and was a sucess. The whole vehicle was recovered sucessfull and a new drogue chute deployment system was validated.

After sucessfull completition of the CanSat Launcher project, HyEnD focused on a new field of research: the development of a liquid oxygen (LOx) and paraffin-fueled hybrid rocket at the size of MIRAS. The 1400N Hybrid rocket engine was developed in autumn 2018 and successfully tested, refined and further developed during six sucessfull tests in spring 2019. Developments from the CanSat Launcher project were also continued and successfully applied in the EXPLORE project. In September 2019, the almost completed EXPLORE project was paused in favour of a renewed participation in STERN, with the possibility to be continued at a later date.

After the pause of EXPLORE, HyEND started focusing on the STERN II project, which includes the development and construction of an ambitious hybrid rocket rocket using a completely newly developed polyer based fuel mixture with nitrous oxide (N2O) as an oxidizer. Furtermore, the rocket will use state of the art lightweight structural components, such as a filament wound combustion chamber, a groundbraeking linerless Carbon fiber oxidizer tank and an ablative rocket nozzle. Like during the STERN programm, it is planned to to test all the subsystems and components in a smaller demonstrator rocket which is designed for a launch in Germany. The rocket of the STERN II programm, called „N2ORTH“, will be launched from the European Sounding Rocket Range „ESRANGE“ in northern Sweden.