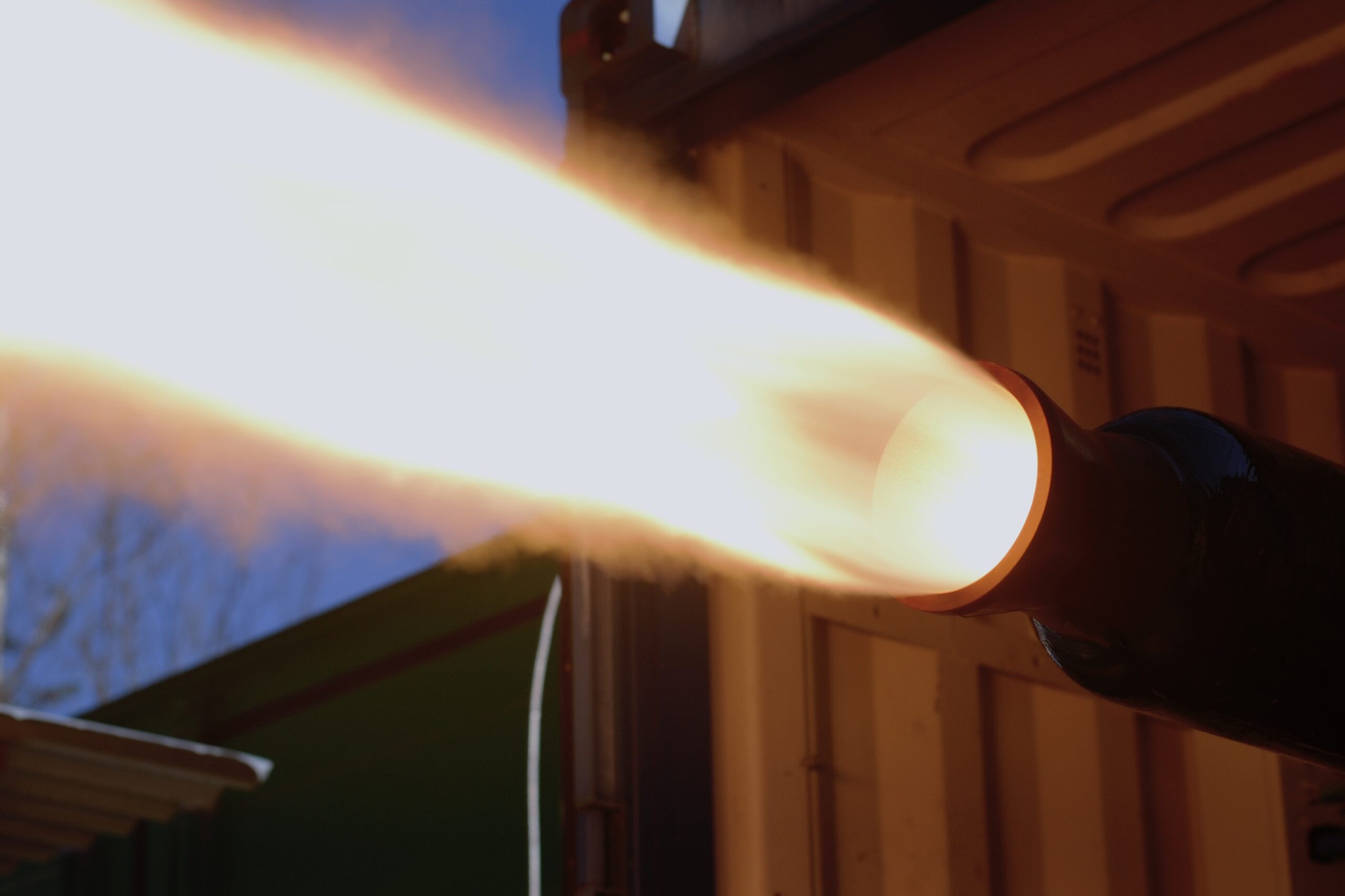 About the DLR STERN Program

The STERN (STudentische ExperimentalRaketeN) program of the DLR (German Aerospace Center) is a program which gives student groups from German universities the possibility to participate in a real space project. Student groups have the mission to develop an own rocket within three years, which shall reach at least 3km altitude and the speed of sound. All rockets are launched from the Esrange Launch Site near Kiruna, Sweden.

STERN finances the student projects with funds from the BMWi (Federal Ministry of Economics and Energy). During the STERN program, several German student groups participated with solid, liquid and hybrid rockets which were successfully launched from ESRANGE. During the program, each team is controlled and supported by reviewers from industry and DLR during the development of their rocket and undergoes the space-typical review process. The main goals of the STERN program are to train students on real space projects, gather teamwork experience (which is inevitable for space projects) and give the students the possibility to develop new technologies and inventions. 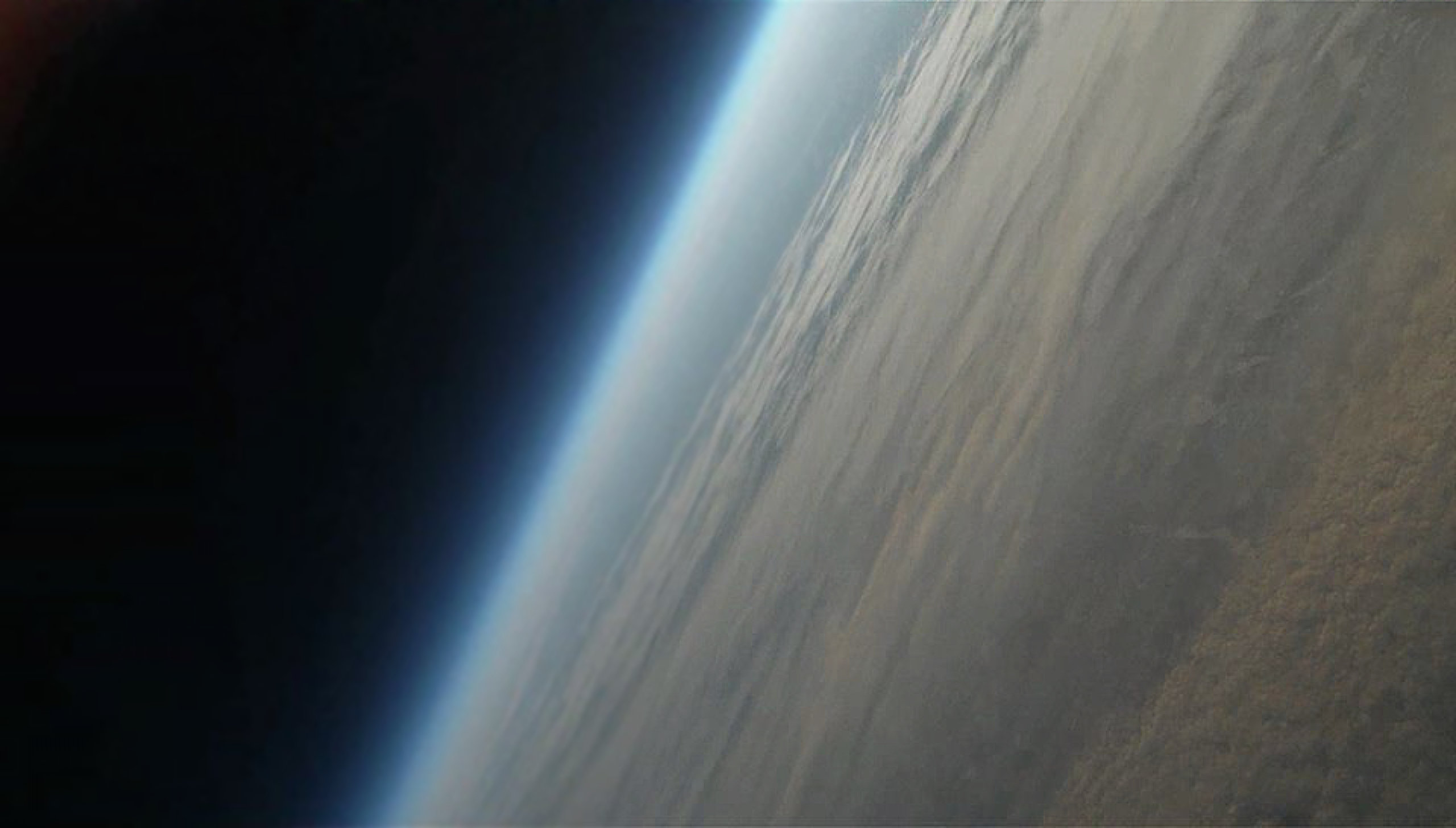 To break the altitude record for student-built hybrid rockets we have established in 2016.

The rocket will be using nitrous oxide and a new, in-house developed fuel. Innovative and lightweight structural elements will be used. The composite oxidizer tank has no liner and is made using a new production process. Nitrous oxide compatibility is ensured by a polymeric coating. All valves and fluid systems are completely new developed with weight optimizations in mind. The two-stage recovery system for the whole rocket is designed for supersonic speeds. All components are extensively tested at appropriate test facilities to ensure a maximum of safety and reliability. The launch is scheduled for December 2022. In order to test the new systems, a subscale demonstrator rocket called Compass was built and launched in advance.

The launch of compass took place on Friday, 25th June 2021 and demonstrated HyEnD’s capability of launching advanced hybrid rockets. All key elements of the design of N2ORTH are part of Compass as well. 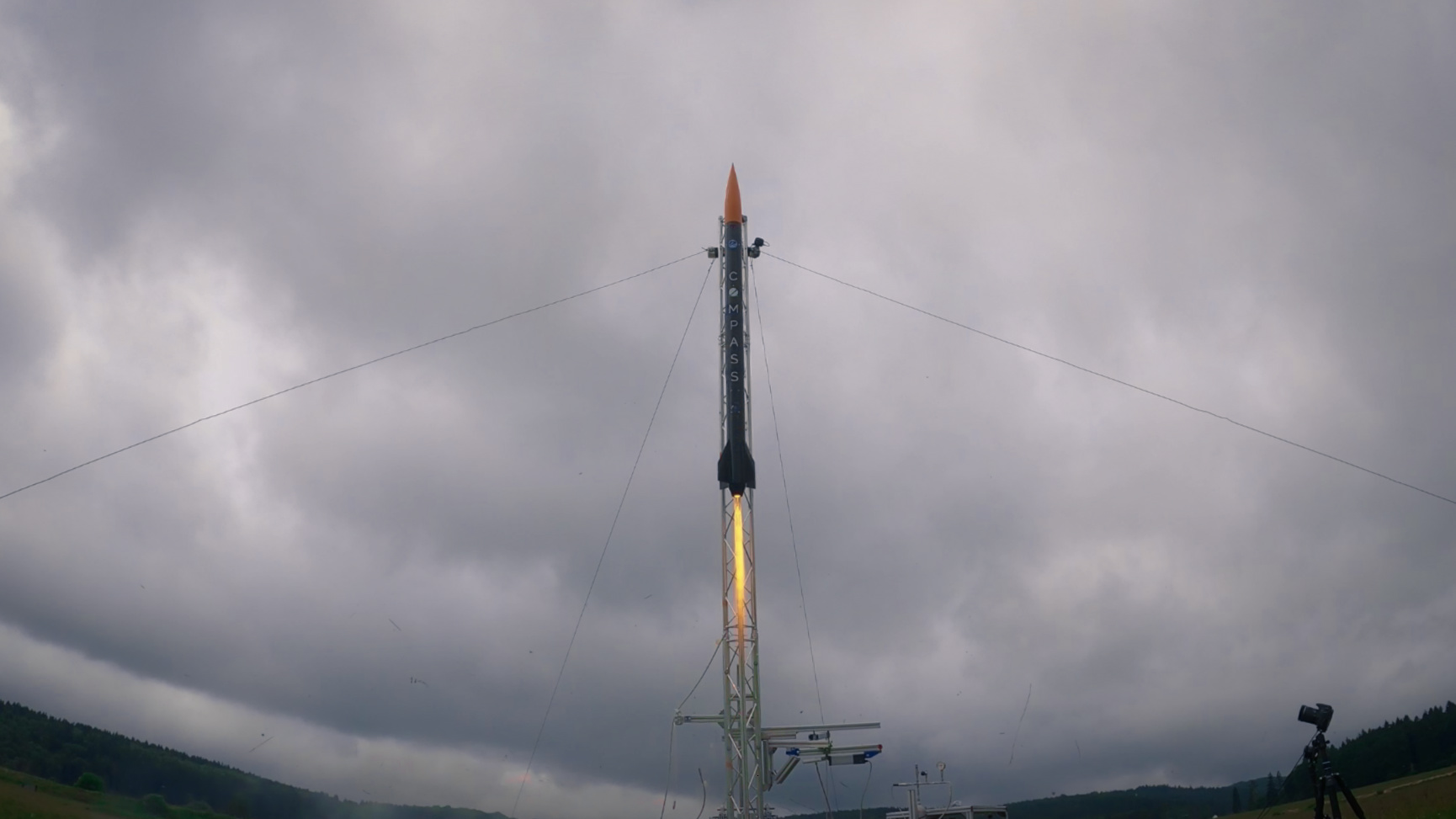 More details, pictures and videos of our subscale demonstrator rocket 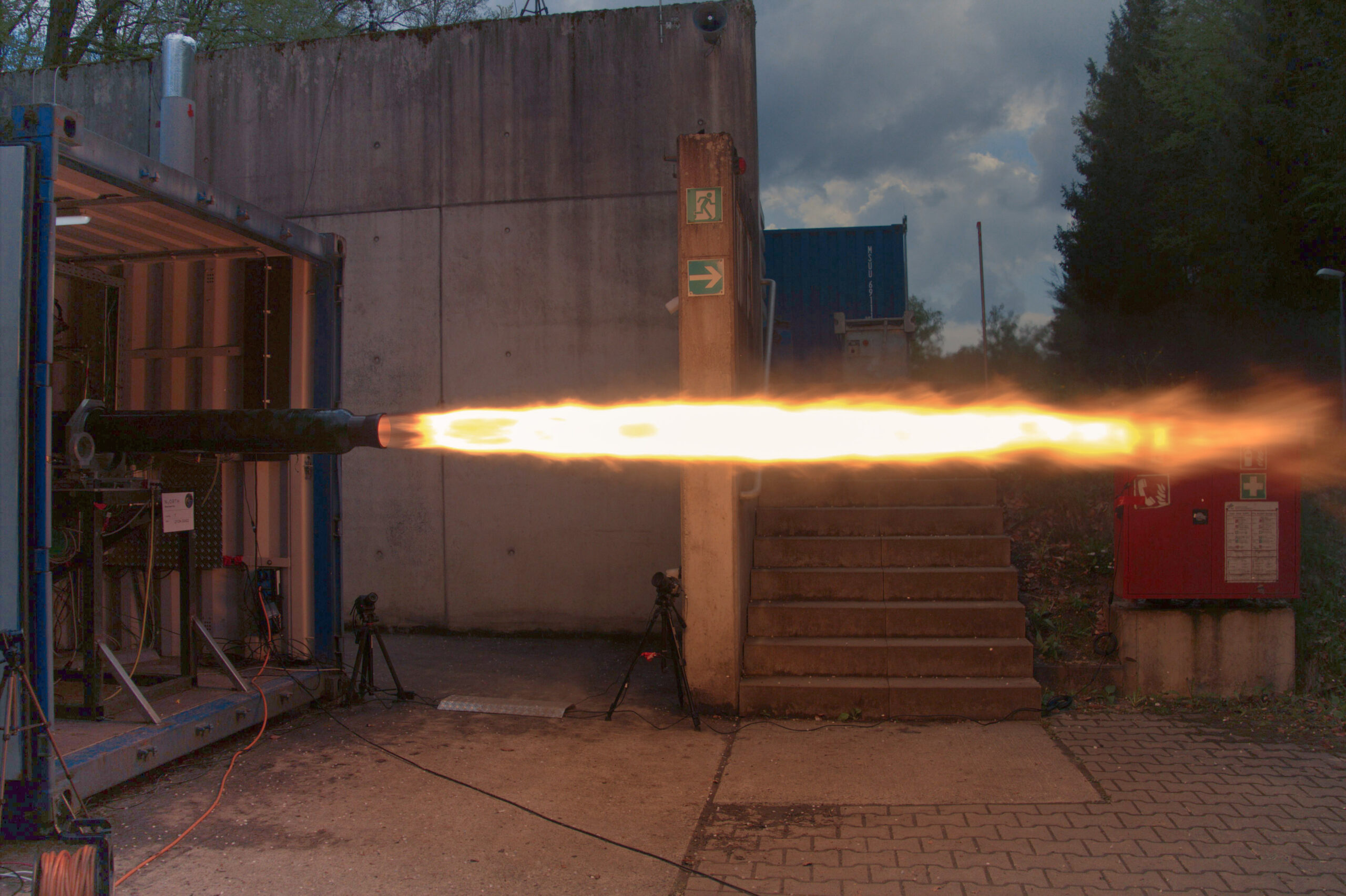 Both rockets, N2ORTH and Compass, feature a lightweight and efficient hybrid rocket engine with a CFRP combustion chamber hull. The propellants used are nitrous oxide (N2O) as oxidizer and a custom developed HTPB-based fuel.  The propulsion system operates in blow down mode, meaning there is no active propellant feeding system. Instead, the self-pressurization capability of nitrous oxide is used and enhanced with additional helium, which is stored in the same tank.  This principle is called helium supercharging and increases the lift off thrust and ensures a safe pressure difference between tank and combustion chamber.

The in-house developed HTPB based fuel is completely non-toxic during all production steps and castable at room temperature. The grains feature a single-port geometry. Both engines have demonstrated highly efficient combustion (>95% c* efficiency).

Non-toxic components of the fuel.

For our project, we decided to use a filament winded combustion chamber design. All casings are produced within our facilities with our new filament winding machine.

Freestanding divergent part of nozzle made of composite.

All tests are conducted at the DLR Institute of Space Propulsion Lampoldshausen at Test Bench M11.5. Most hot fires are conducted with constant tank pressurization using nitrogen. Additionally, blow down operation is tested together with other rocket systems (tank, valves, GSE) in a separate test before the launch.

Since September 2020, HyEnD has conducted more than 40 tests with the smaller HyFIVE rocket engine. Tests included the evaluation of the fuel regression rate and combustion behaviour as well as the test of different ablative insulation materials, injectors and mixing elements in the post combustion chamber.

First tests with a modular HyLIGHT engine with an aluminum casing were conducted in September 2021. Smooth and efficient combustion was achieved by using a multi-element swirl injector in combination with a mixing element. Different fuel grain geometries and film cooling ablator materials were compared. First tests with the CFRP casing were conducted in early 2022. A total impulse of more than 267 kNs was tested in a single hot fire.

Engine in blow down operation 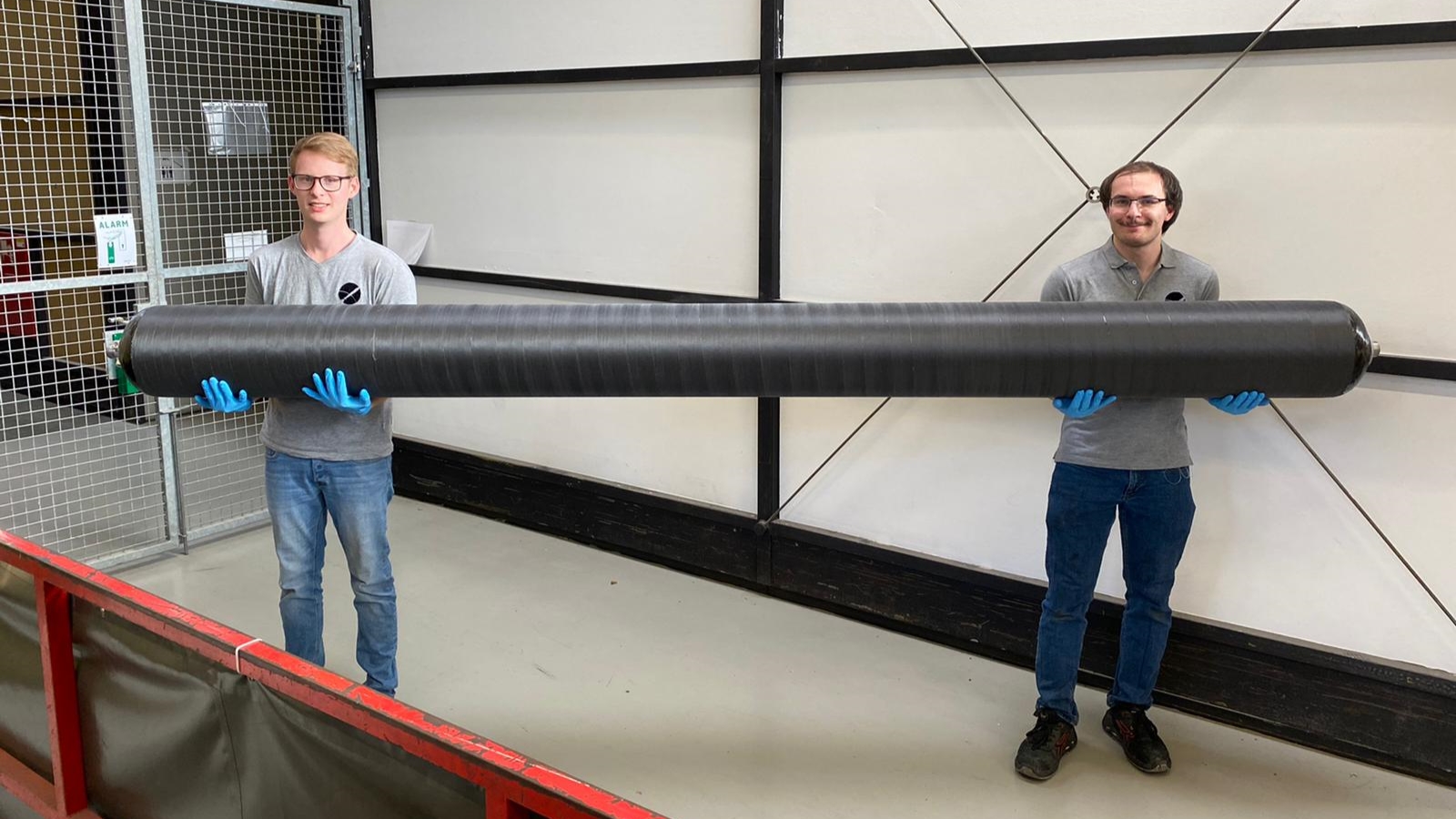 After the successful flight of Compass, the structure and aerodynamics team is working on prototyping, manufacturing and simulating the N2ORTH rocket. This includes the structural Type V (no load-bearing liner) oxidizer tank, which features a filament wound CFRP construction and is manufactured in-house.

The nose cone is constructed from GFRP to satisfy radio transmissivity requirements and modeled after the LV-HAACK Series to minimize drag. As a first for HyEnD, the airframe is also filament wound in-house in order to maximize strength while allowing for the usage of specialized high-temperature epoxy resins.

To withstand shock heating while flying at Mach>3, all wetted parts are laminated with in-house developed high-temperature epoxy systems and protected by additional insulation material

The trajectory and thermal simulations are used to verify range safety and thermal loads by using Dispersion, FEM and CFD analyses. 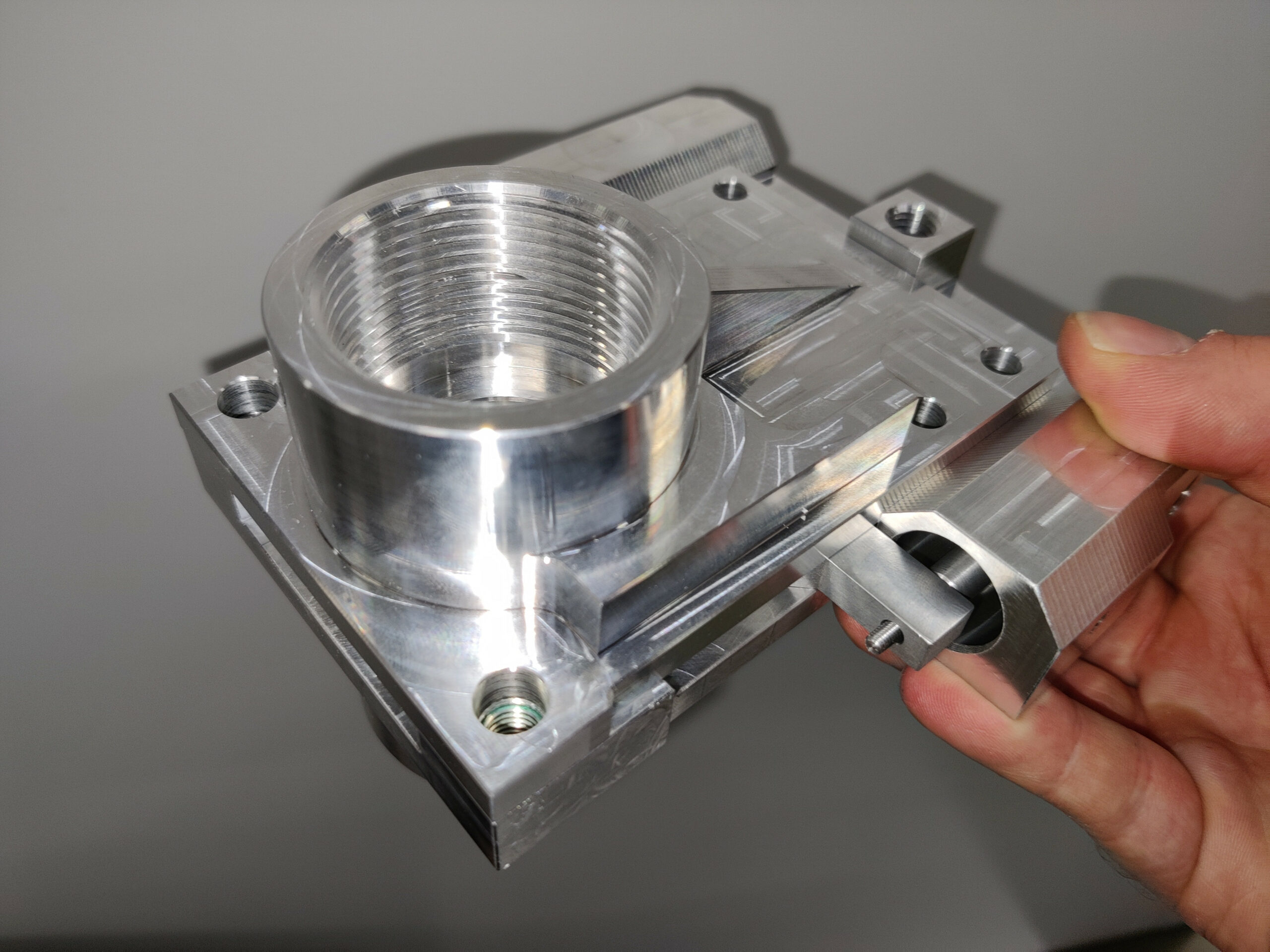 The fluid system is mainly tasked with the development of the main vale, providing a fueling interface to the GSE and ensuring the safe handling of the oxidizer inside the rocket. Therefore, the following components are necessary:

The focus lies on the development of a lightweight, compact and reliable system. Because of the former two requirements, in-house developments for the main valve and the release valve are chosen over commercially available products.

Hence, the development of the main valve is a substantial task of the fluid system. A pyrotechnically actuated slider design is chosen, which has been examined in a number of test campaigns. This ranges from the first subscale prototype to the prototype of the N2ORTH main valve. Additionally, the concept was flight proven in the Compass rocket, where it performed flawlessly.

For the release valve, a lightweight and reliable concept is developed. Again, the concept was examined during test campaigns with different prototypes.

The system as a whole was successfully tested during the Compass launch and the Compass static hot fire test. These subscale tests are an important milestone for the development of the N2ORTH fluid system. 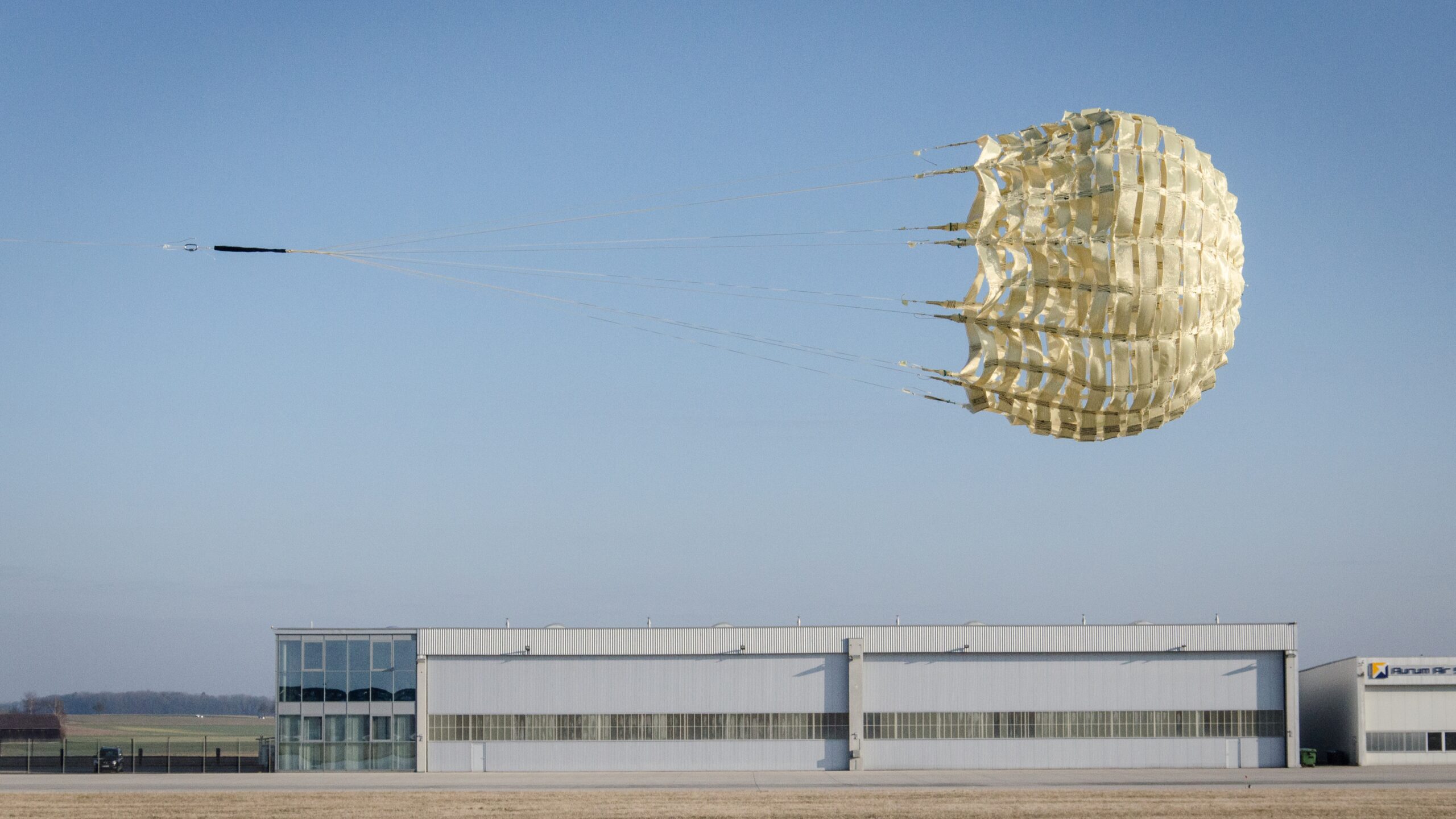 The N2ORTH recovery system is designed to perform the required safe landing of the entire rocket.

According to our ambitious altitude goal, a supersonic drogue parachute becomes necessary. A hemisflo ribbon design was chosen to meet these requirements. The drogue parachute is ejected at apogee to slow down the rocket to a steady descent rate.
At an altitude of 3000 m the second stage of the recovery system is triggered to further decelerate the rocket allowing the aspired save landing. All opening occurring shock loads are neutralized by polyamide shock absorbing harness components.

The entire recovery system is stored in a department in the upper part of the rocket.

The entire recovery bay is located in the upper part of the rocket. The following picture shows a schematic of the structure and the lines. 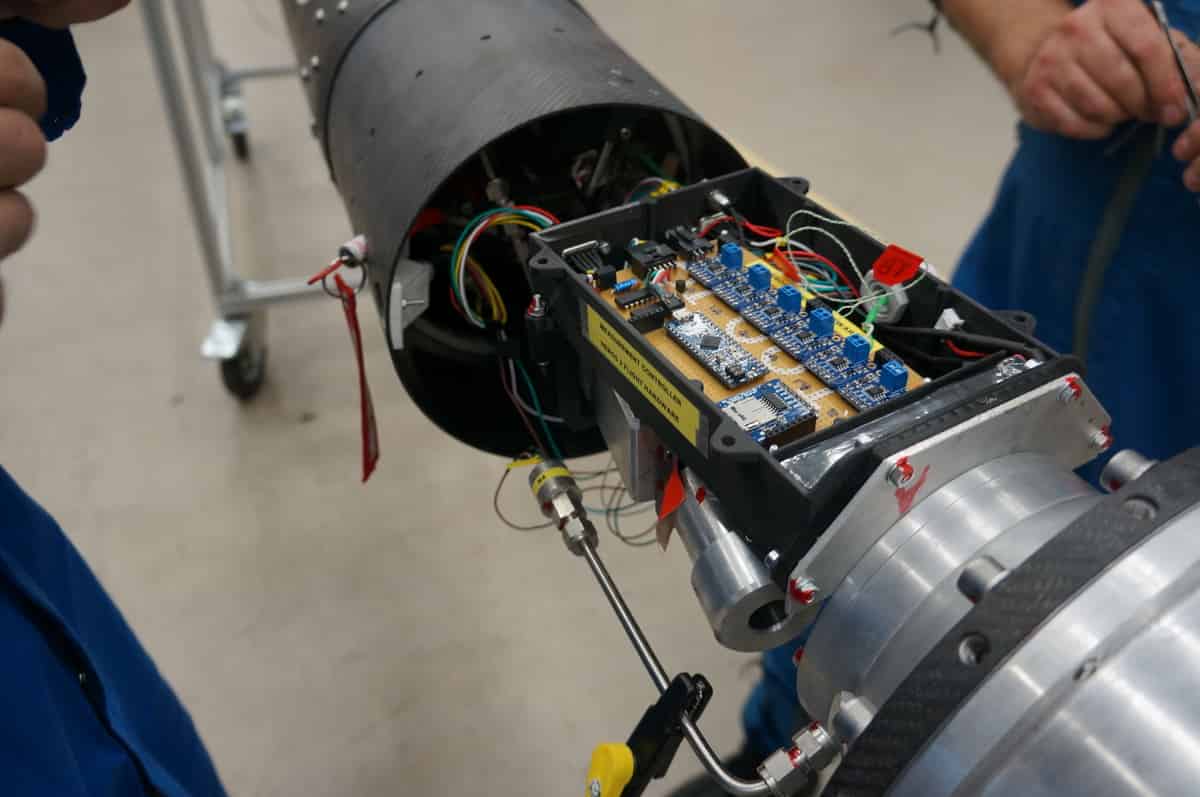 The avionics need to fulfil multiple tasks, mainly activating the pyro lines firing the recovery system as well as collecting as much data as possible to allow further analysis after the flight.

It consists of many different modules, each one dedicated to a specific task e.g. gathering trajectory data. The systems can communicate between each other to allow the different modules to send their measurement data to a central microcontroller. The collected data will then be transmitted to the ground station.

In order to obtain pressure data of the engine and tank with a high sample rate, a custom module is designed to read and store the measurements with a sample rate of up to 10 kHz. This enables a detailed frequency analysis after the flight, making it easier to compare the behavior of the rocket in flight with the previous tests and simulations.

Another part of the avionics is dedicated to the powertrain. A stable and redundant power supply is extremely important. A loss of electricity will render the whole mission unsuccessful. The power train is customly designed to prevent a variety of common problems, like overvoltage and overcurrent as well as being able to switch between two sets of batteries and voltage regulators.

The parachute deployment is done via two parallel Telemegas. They will detect the apogee and trigger the recovery mechanism. Both will send additional data regarding the trajectory. 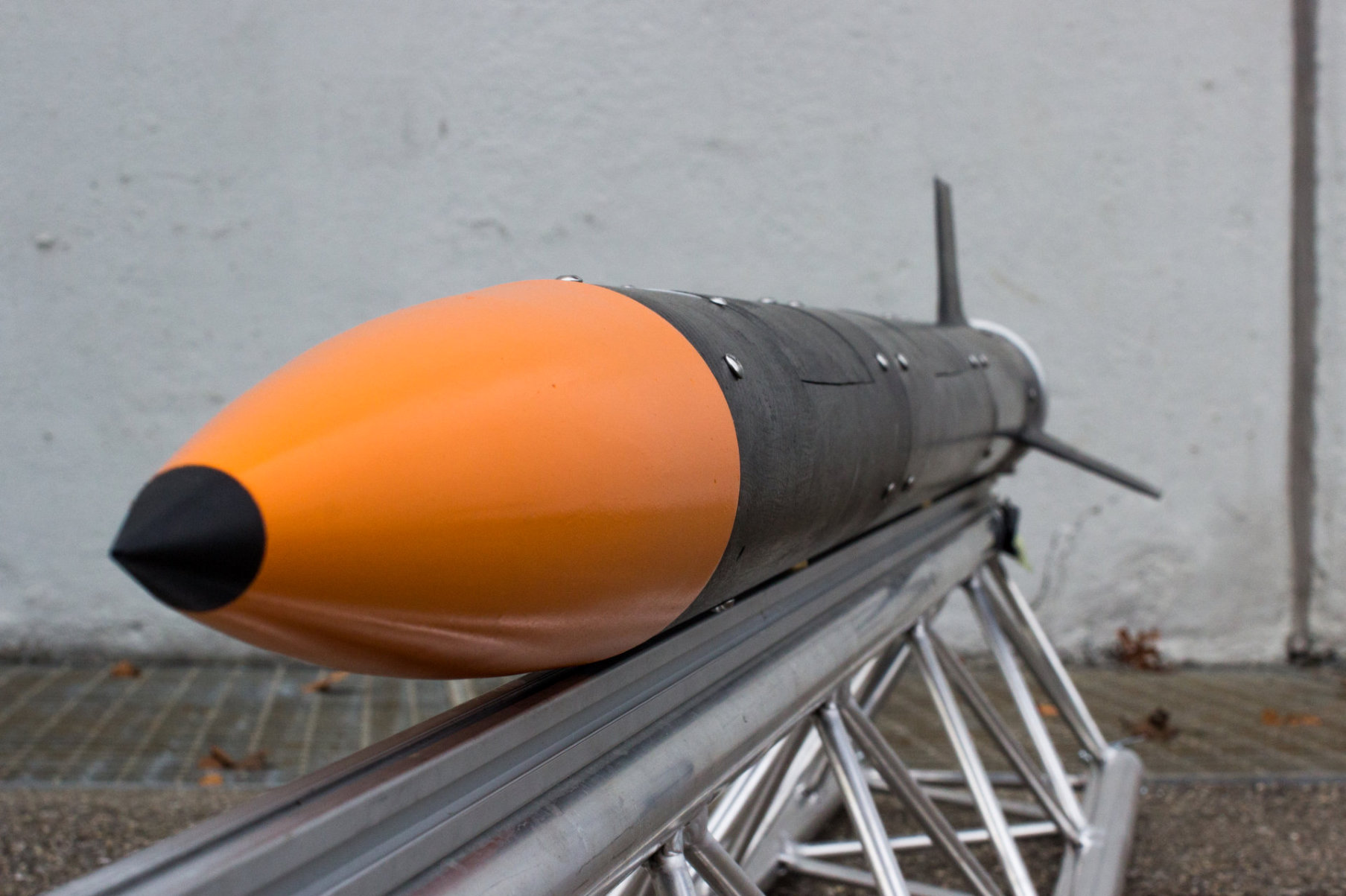 The ground support team is responsible for providing a safe launch platform on the ground. The open-end design provides a platform that can be adjusted and repurposed for future projects.

1.            Controlling the fueling process through valves and sensors

To accomplish these tasks, the GSE control system is divided into different custom PCBs controlled by a Raspberry Pi. This allows for the use of higher quality shielded connectors while still maintaining a compact design. Furthermore, the pyrotechnic section is galvanically separated from the rest of the system to prevent any risk of damage to the delicate electronics with high currents.

The Raspberry Pi is running C Code and communicates with the control computer over Ethernet. It can run completely independently which allows for automated actions and fail safe in case of communication issues.

The deployment of the oxidizer will be realized by our oxidizer supply system. It is crucial to deliver the right amount to ensure that the engine will operate within the defined parameters. Therefore, the nitrous oxide used as oxidizer will be stored in an intermediate gas tank. The weight of the tank will be measured. Combined with the level indication inside the rocket tank the amount of oxidizer shall be determined.